A lifetime of giving back

Harold and Joanne Hook are passionate about education, and their gifts have been used to establish the Hook Center for Educational Renewal and to endow the Joanne H. Hook Dean’s Chair in Educational Renewal. To learn more about the Hooks and their remarkable careers please see the story below that appeared in the college’s Spring 2014 Ed Life magazine.

It takes just a quick look at Harold Hook’s list of achievements to know he is a natural born leader.

The youngest of four boys, Hook grew up on a dairy farm in Lee’s Summit, Mo. He followed his three older brothers to the University of Missouri, earning a bachelor’s degree in business administration in 1953 and a master’s degree in accounting one year later.

“My time at Mizzou was life changing,” says Hook. “I realized pretty quickly I needed to leave my high school letter jacket at home. My teachers weren’t interested in what I had done. They were interested in what I was going to do. It’s sobering to realize how important and decisive those four years of college are in determining the rest of your life.”

“My time at Mizzou was life changing,” says Hook.

Hook, a Jackson County resident, was in graduate school at MU when then-President Frederick Middlebush tapped him to introduce former president Harry S. Truman when Truman visited the MU campus in 1954.

“I did my best to introduce him even though I had no idea how to introduce a former president,” says Hook. “When I sat down, Truman said with a smile, ‘I appreciate that generous introduction from Mr. Hook because his family hasn’t voted anything but straight Republican in Jackson County for 100 years.’”

After graduating from MU, Hook served from 1954 to 1957 as an executive officer and navigator on a minesweeper in the U.S. Navy.

Youngest insurance president in the nation

In 1965, Hook made history as the youngest insurance company president in the nation when he became president of the National Fidelity Life Insurance Company at age 31.

In total, he spent 40 years in the life insurance and financial services industries before retiring in 1997, which included 18 years as chairman and CEO of American General Corporation. American General is one of the nation’s largest insurance and financial services organizations. As the company’s third president, Hook embarked on a new growth initiative that brought 20 new firms into the company which nearly tripled its size.

“As a CEO, Harold had excellent judgment and courage,” says Bill Phelps, a former student of Harold’s, business associate and personal friend. Phelps also served as lieutenant governor of Missouri from 1972 to 1980.

“In addition to his innovative and creative leadership skills, he is a teacher at heart,” Phelps says. “His interest in education probably began with his father who was president of the Lee’s Summit School Board for many years. Harold’s father consolidated all of the one-room school districts into the larger and very successful Lee’s Summit School District.”

While at Mizzou, it only took one glance for Hook to become smitten with Joanne Hunt.

“I was leading a group of students through orientation my senior year when I spotted this group of girls,” says Hook. “There was one girl in particular who caught my eye. She was a sophomore volunteer on a student committee. I asked her out and she said yes. That’s where it all started and it’s been that way ever since.” The two married in 1955 after Hunt graduated from MU with a degree in elementary education and the couple recently celebrated 59 years of marriage. “Joanne is as strong-willed as Harold is, they are evenly matched,” says Jim Hook, Harold’s brother. “She fit right in to our family.”

Joanne Hook taught in the Panama City School System and at Tyndall Air Force Base in Florida while Hook was in the Navy. They welcomed their first child, Karen, while stationed in Charleston, S. C., and then moved to Kansas City, Mo., where their two sons, Tom and Randy, were born.

The Hooks, who also have five grandchildren, now reside in Houston, Texas.

“I felt like a nomad as a youngster because my family moved around quite a bit for my dad’s job and I had to start several new schools,” says Joanne Hook. “It was good training ground for the many moves Harold and I made with our family.”

Hook is widely known for his outstanding business career, as well as serving in leadership positions for more than 20 civic and philanthropic organizations. A recipient of the Distinguished Eagle Scout Award, he went on to become national president of the Boy Scouts of America, as well as president of the Houston Chamber of Commerce.

“Harold epitomizes a family of achievers,” says Phil Acuff, a friend of Harold’s since grade school. “He always works hard and smart, giving 100 percent to any endeavor in which he is involved.”

Hook has also been a loyal supporter of MU. He was a member of the Trulaske College of Business Strategic Development Board, For All We Call Mizzou National Campaign Steering Committee and numerous other MU committees and groups.

In recognition and appreciation for his service to the university, he received the Distinguished Service Award from the Mizzou Alumni Association (MAA) in 2013, one of MAA’s highest honors.

He also received a Citation of Merit from the Trulaske College of Business in 1965, Mizzou Alumni Award in 1978, Honorary Doctorate of Law in 1983 and Friend of the College Award from the College of Education in 2009. Joanne is active in the Daughters of the American Revolution, Phi Beta Phi Alumnae Board and several volunteer organizations. 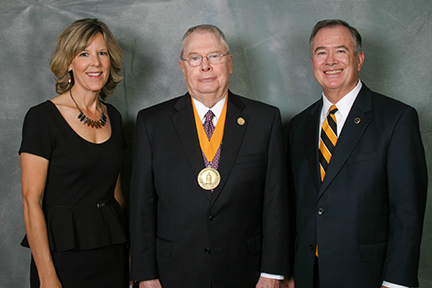 “Joanne is an enterprising and accomplished woman who has spearheaded various causes in Houston and nationally,” says Acuff. “And she does it in a very warm and easy fashion. Good things happen when she is around.”

Jim Hook says in college he got most of the ink as a quarterback on the MU football team, but it wasn’t long before the tables turned and Harold Hook began receiving a good deal of attention in the media for his business accomplishments. “All of us older brothers turned to Harold for advice and counsel on business matters,” says Jim Hook.

“Anyone who knows Harold knows he is fond of quotations,” adds Jim Hook. “He got that from our mother who frequently said, ‘If you can’t say something nice, say nothing at all.’ Harold always took that to heart, even when I accidentally broke his jaw at a high school football practice. He never held that against me and that trait spilled over into his business life as well. He might have gone up against you in a business deal, but he was never mean in any way or held a grudge against you.”

For Harold Hook, his business success can be attributed in part to a personal philosophy that has guided him for many years when he served in leadership roles. “I viewed myself as a steward,” says Hook. “I am proud of my body of work. I did the best I could when I had the chance to do it. I was honored to serve and I took it seriously. But I always knew there would come a time when I would be handing off the baton to a successor, the next steward.”

“Harold and Joanne have also been wonderful stewards of the College of Education,” says Daniel L. Clay, dean of the College of Education. “For more than a decade, they have nurtured a vision and inspired the college to take a leadership role to improve education in Missouri and beyond. I am deeply grateful for their wisdom, for their belief in the power of education, and for the support they have given to the college.”

In 2004, the Hooks established the Hook Center for Educational Leadership and District Renewal and the Joanne H. Hook Dean’s Chair in Educational Renewal.

“It is the college’s largest single gift,” says Clay.

“I believe in paying back,” says Hook. “When I decided to fund the first endowed chair at the college, I knew I was going to name it in Joanne’s honor. I found a beautiful wood toy chair and had it inscribed with ‘Joanne H. Hook Dean’s Chair in Educational Renewal.’ I don’t know of anything I’ve done that has pleased her more. It sits in our bookcase at home and it brings me pleasure to think about it.”

About the Hook Center

“The goal of the Hook Center is to translate research and experience into best practices that help educators more effectively manage and operate schools,” says Blake Naughton, executive director of the Hook Center. “The college spearheads this effort drawing on an immense pool of talented researchers and practitioners affiliated with the college and its associated partners.”

Focus areas include improving the education system for individual schools, districts and colleges; improving public policies related to innovative and effective school governance; and developing talented principals, superintendents, board members and other educational leaders. A special focus area of the center is turning around low-performing schools into national models of educational excellence.

The Hook Center also recently launched the Missouri Network for Educational Improvement (MNEI). MNEI is an ambitious statewide partnership between the Missouri School Board Association, Missouri Association of School Administrators, teacher associations in Missouri and business leaders. The network develops systematic approaches to improving how schools are managed.

Other initiatives are in the planning stages that will bring together school leaders and policymakers around the educational renewal of Missouri schools.

Learn more about the Hook Center