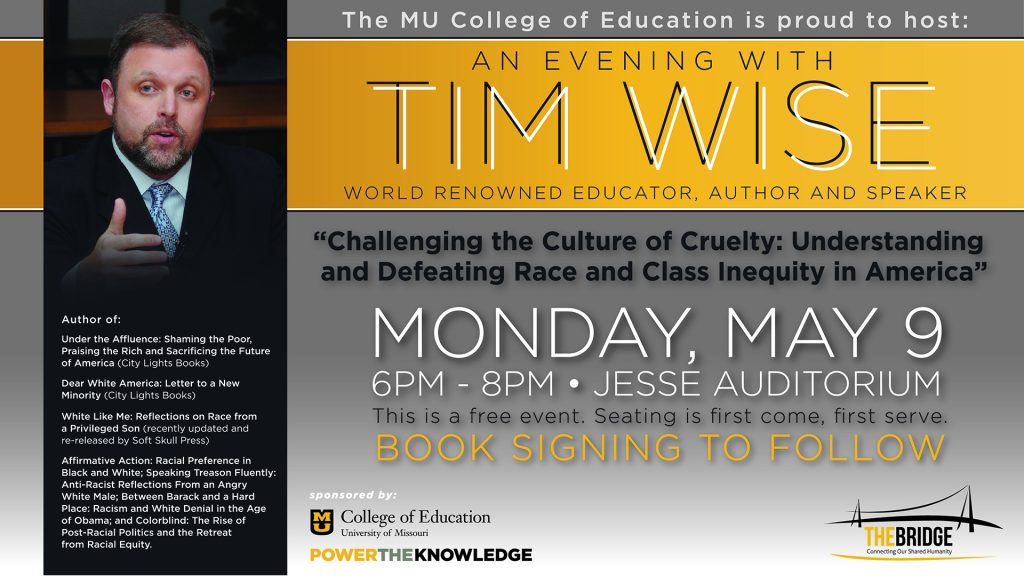 MU to Host Lecture on Defeating Race and Class Inequity

WHAT: The University of Missouri’s College of Education will host “Challenging the Culture of Cruelty: Understanding and Defeating Race and Class Inequity in America,” featuring Tim Wise, a world renowned educator, author and speaker.

WHO: Wise is a prominent antiracist author and educator. He has spent his career speaking on more than a thousand college and high school campuses, at hundreds of professional and academic conferences and to community groups across the nation and world. He also has trained corporate, government, law enforcement and medical industry professionals on methods for dismantling racism in their institutions.

In addition, Wise is the author of seven books, including his highly acclaimed memoir, “White Like Me: Reflections on Race from a Privileged Son,” as well as “Dear White America: Letter to a New Minority,” and his latest, “Under the Affluence: Shaming the Poor, Praising the Rich and Sacrificing the Future of America.” He has contributed chapters and essays to more than 25 additional books and has been featured in several documentaries.

NOTE: The lecture is free and open to the public. There will be a book signing to follow.

View this news release on the web